A small group meets at Flux Factory on Saturday morning for a walk around the neighbourhood. Straight away talk turns to how awkward it is to cross New York City with a stroller (pram) and how much easier it is to use a sling or carrier when you need to use the subway. We set out on our walk – heading to Dutch Kills playground. 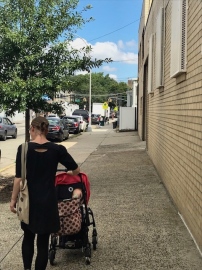 As we walk we talk about the sidewalk – the concrete slabs and the cracks between them. We talk about the new development in the area and how the new builds have brought improvements to the sidewalks – apparently they were much worse before – almost impassable. We arrive at the playground and talk about public space, about how children play and what combinations of public/private might mean. We talk about private and privatisation (in relationship to schools) and how policies on private public spaces have been imported from NY to London.

We stop outside the unfinished playground and I read from the New York State Labor Law (posted on the site noticeboard) about the rights of breastfeeding mothers in the workplace):

Under NYS Labor Law Section 206-C Breastfeeding in the Workplace Accommodation Law (2007), your employer cannot discriminate against you for choosing to breastfeed your baby or for pumping milk at work.

We talk about breastfeeding and maternity leave, maternity pay and paternity leave, mother and baby groups, childcare, nannies and nurseries. Astrid is grumpy and doesn’t want to stay in the pram. I transfer her to the sling and we continue the walk – bizarrely pushing an empty pram while carrying the baby……. 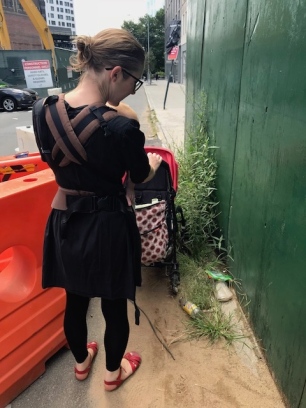 We stop in at the Windmill Garden, and then finish the walk at the oasis of green by Queen’s Plaza.