I began the day with a flag making workshop at the Wee Toots Messy Play group: 16 two and three year olds made hand prints onto cloth, which was then transformed into flags for the kids to carry in the afternoon. These will accompany the flags that were made from the cloth that the BYOB babies decorated last Thursday. 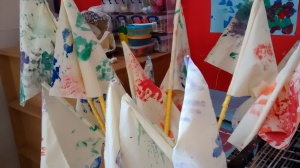 After Messy Play we had a quick run around, getting Ernest off to sleep in the pram, and heading down to the Nordic Centre playground to set up the start point. 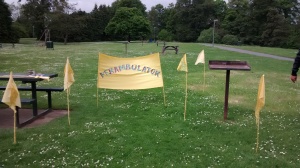 Ernest and Ruby and I then took part in the Wee Toots sponsored toddle, around the Nordic Centre track before heading back to the playground to group for the parade, attaching flags and brooches to the prams ready to set off.

← Getting there with the banner…..
Perambulator Parade →